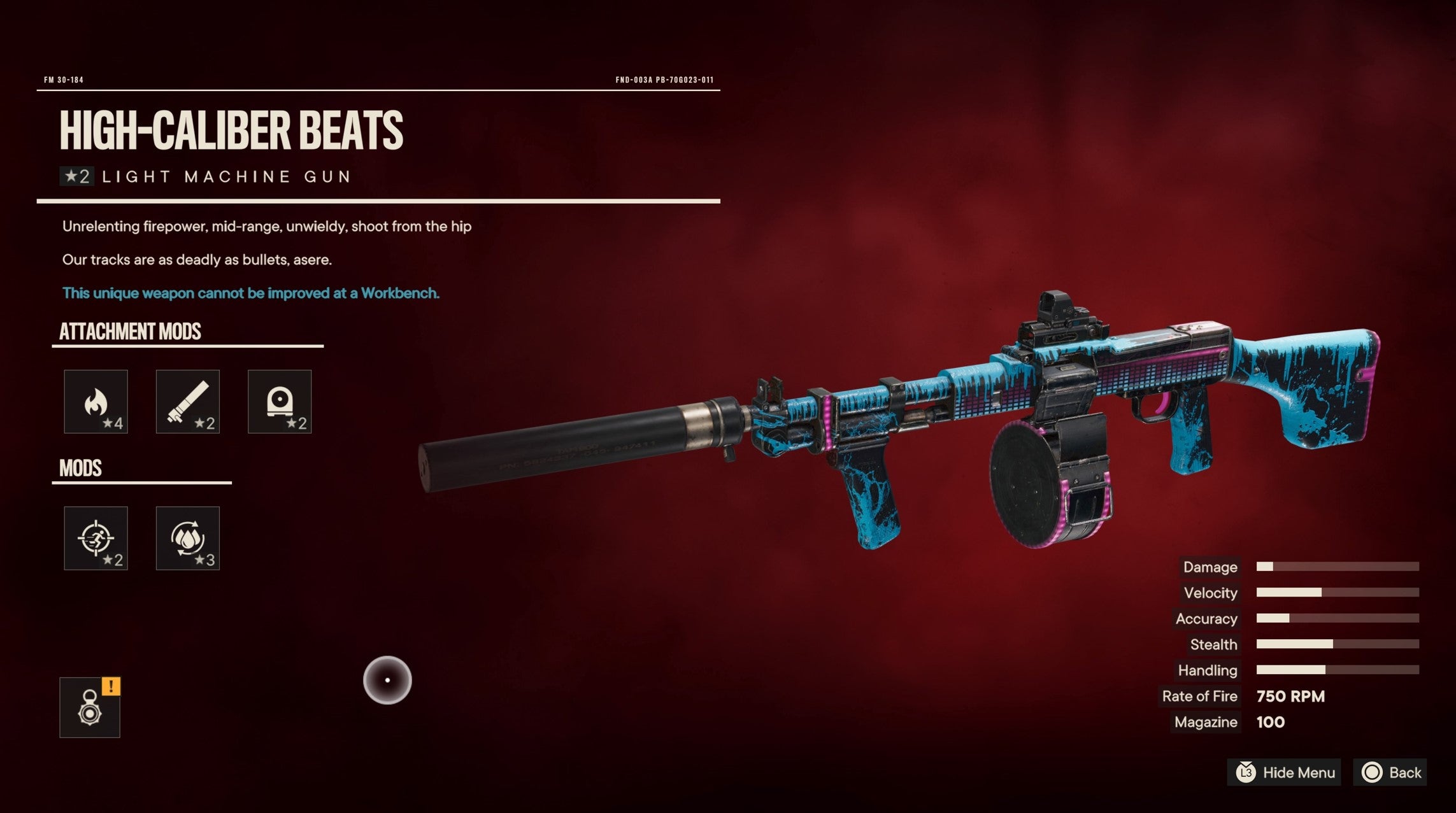 
Rule 9: A guerilla uses the right tool for the right job, and to topple Anton Castillo, you’ll need the best weapons in Far Cry 6.

From more conventional weaponry to the outlandish Resolver weapons, there’s something for every situation, whether it’s taking out tanks and helicopters, slipping into an FND compound, or defending yourself against waves of enemies.

First, we’ll go over some of the most fun weapons in Far Cry 6 you might have missed, either because their menu icon doesn’t do their power justice, or they’re just hard to find.

Then we’ll go through all the locations of unique weapons in Far Cry 6 we’ve found so far, and update them as the game progresses.

But before we go into specifics, here’s something to remember. The regular weapons you buy or find in caches around Yara can be just as good as unique weapons.

All of the regular weapons you see above the Unique weapons in the Arsenal menu can be bought from camp vendors or found in chests around the world. If you upgrade them at a workbench, they can deal great damage and be as powerful as any of the unique weapons, so don’t feel like you have to neglect them just because there are more colourful options.

To give the regular weapons a more personal touch, “inspect” them in the Arsenal menu, then look for the “Appearance” menu in the bottom left of the screen. You can give them a custom paint job with spray cans you find littered around here, and they look great.

Best Far Cry 6 Weapon for taking out tanks, helicopters, and other vehicles

Something you might struggle with in Far Cry 6 is dealing with armoured vehicles like tanks and attack helicopters. Not only do they have a lot of health, but they pump out such a huge amount of explosive damage that they can kill you pretty much instantly.

This means you need a launcher in your arsenal, and the easiest launcher to lay your hands on – not to mention one of the silliest – is the Pyrotechno.

The fireworks-based Resolver weapon is available as soon as you get the ability to craft them, and is worth the uranium investment.

It’s great when you need to destroy vehicles, and also a blast during story missions where you get infinite ammo to explode everything in sight.

Best Far Cry 6 Weapon for taking on groups of enemies

Another Resolver weapon that’s great fun but easy to miss is the El Muro.

While it just looks like a small pistol on its picture, it’s actually a one-handed, snub-nosed shotgun which comes with a damage-absorbing metal shield.

Boasting power and defensive capability, El Muro is a great choice when you’re starting to feel overwhelmed by enemies and need something to take the pressure off.

You can also use it in an offensive capacity and rush into the heat of battle without compromising your cover.

How to get a great Unique weapon easily

From your Arsenal menu, look in the top-right of the screen. Press on the “Store” icon, then navigate to the last tab: “Ubisoft Connect”.

With a Ubisoft account, you earn points for playing different games, and if you’re a fan of Assassin’s Creed or older Far Cry games, it’s easy to have racked up a few coins without realising.

In the Ubisoft Connect area of the store, you can buy High-Caliber Beats, an incendiary LMG with a scope and silencer that sets your enemies on fire.

Its damage is pretty poor, but as an early-game option, it’s a lot of fun and a great way to play with incendiary rounds early.

Relatively early on in your Far Cry 6 adventure, you’re encouraged by Clara to win the trust of the Montero family in the west of Yara.

Off the northwest coast of the island is an oil rig that you visit for a quest with Philly later in that story arc, but it’s accessible as a military outpost to take over if you’re up to the task.

On the rig, in the southeast corner, there’s a weapon icon hidden inside a shipping container. To get inside, look over to the west for a blue picture of a grenade.

Inside that office, there’s a button to move the containers so you can grab the loot.

This gets you the Supercharger, a buck-shot-firing, silenced shotgun which is both extremely powerful and stealthy.

With this you can sneak around enemy camps and if you’re spotted, drop their whole health bar in one shot without alerting anyone else. A fantastic pick-up at any point in the game.

Where do you find Unique Weapons in Far Cry 6

Unique Weapons are heavily customised guns with special paint jobs you can find throughout Yara.

However, Unique weapons can’t be customised at a workbench, so they can be quite limited in certain situations.

Despite that, they’re a lot of fun to collect, and you will likely want to go out of your way to snag them.

You know when you’re onto a winner when you see a box with a pistol on it in your minimap. But you can get them as quest rewards too.

Here’s a running list of all of the ones we’ve found so far:

Add the final piece to your guerilla toolkit with our list of the Far Cry 6 Amigos.