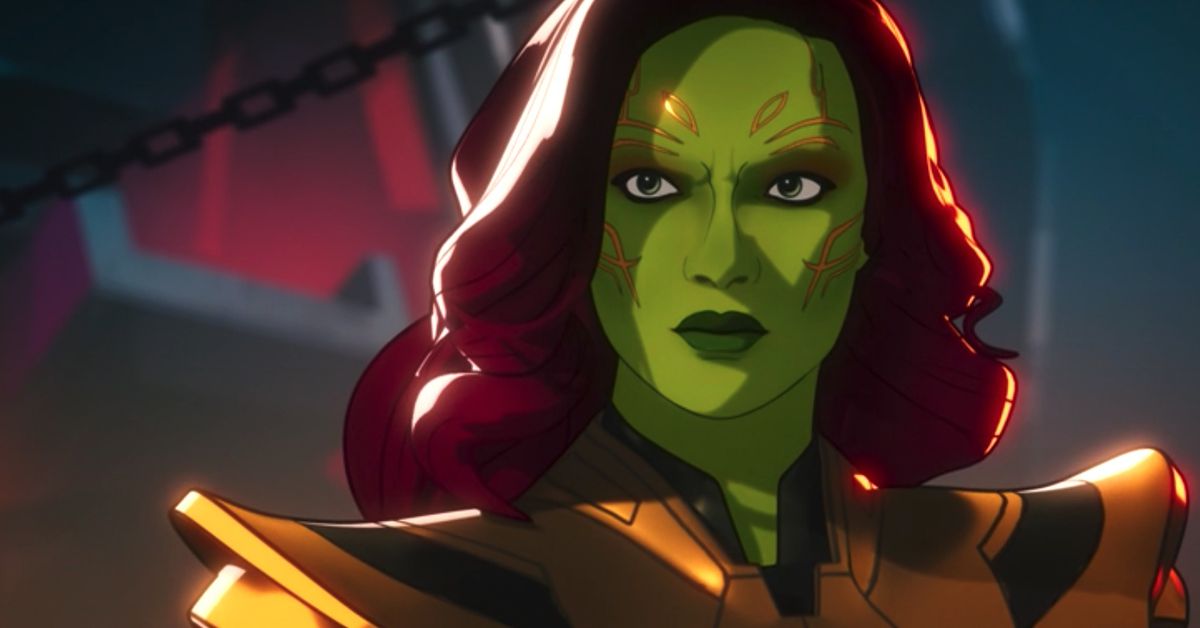 What happened to What If’s missing Gamora episode


Season 1 of What If…?, Marvel Studios first-ever animated show for Disney Plus, wrapped up with a finale that echoes the best parts of Avengers, Age of Ultron, and Endgame. The Watcher, having broken his oath to never interfere with the inner-workings of the multiverse, gathered heroes from across the planes of existence to form his own team: The Guardians of the Multiverse. Captain Carter, Star-Lord T’Challa, Party Thor, Killmonger/Black Panther, and Dormammu-ish Doctor Strange were all there.

And so was Gamora, who … has not been a major part of any particular episode, despite each of the Guardians being established in a previous one-off of What If…?. How did Gamora catch The Watcher’s eye? There’s a practical reason, and we’ll likely see the backstory in the future.

[Ed. note: The rest of this story contains spoilers for What If…? episode 9.]

In the early scenes of “What If… The Watcher Broke His Oath?” Jeffrey Wright’s omniscient character arrives to the planet Nidavellir to greet Gamora, Iron Man in a Hulkbuster-esque armor, and Elitri, king of the dwarves, recalling a moment from Avengers: Infinity War in which Thor and Rocket Raccoon fetch a bespoke axe from dwarven forge. In this world and timeline, Iron Man hopes to use Elitiri’s skills to put “a suit of armor around the world,” in a nod to his plan that spawned Ultron. But why are they together? Because there’s an entire episode of What If…? waiting to be finished in which the two meet in the orbit of Sakaar.

An episode that centered on Tony Stark was supposed to premiere in this first batch of episodes, What If…? creator A.C. Bradley confirmed to Polygon. But due to COVID-19-related production issues, the episode was unable to be completed on time for release, forcing producers to bump it off to What If…? Season 2 (which is good news for anyone hoping for a What If…? Season 2).

While “What If… The Watcher Broke His Oath?” now raises some accidental questions about Tony and Gamora’s relationship in a pocket of the multiverse, Bradley says it was worth the trouble. “Given the global tragedy of the pandemic, pushing an episode is nothing,” she wrote to Polygon. “I only hope viewers have been entertained these last 9 weeks, and enjoyed the ride as much as I did.”

The episode certainly delivers with or without an explanation for why Gamora is among The Watcher’s chosen ones. In the grand finale, the combined powers of the Guardians of the Multiverse — Gamora included — are enough to subdue an Infinity Stone-wielding, universe-consuming Ultron and allow none other than Black Widow to step up and infect the bot with the digital Arnim Zola from Captain America: The Winter Soldier. Natasha Romanoff’s death was one of the most polarizing aspects of Avengers: Endgame, and while the animation nods to her Soul Stone sacrifice, What If…? renews the character with heroic energy worthy of a cosmic battle. It rules.

So what’s in store for Gamora and Tony in What If…? season 2? While a few pre-season-1-premiere leaks hinted at the episode’s plot, including how Tony arrives to Sakaar (a location name-checked in “What If… The Watcher Broke His Oath?) and why The Watcher refers to Gamora as the “destroyer of Thanos,” nothing is completely certain with production resuming and the Iron Man episode folding into a new batch What Ifs. For now, the Season 1 finale unintentionally does what a Marvel installment does best: leaves us wanting more.