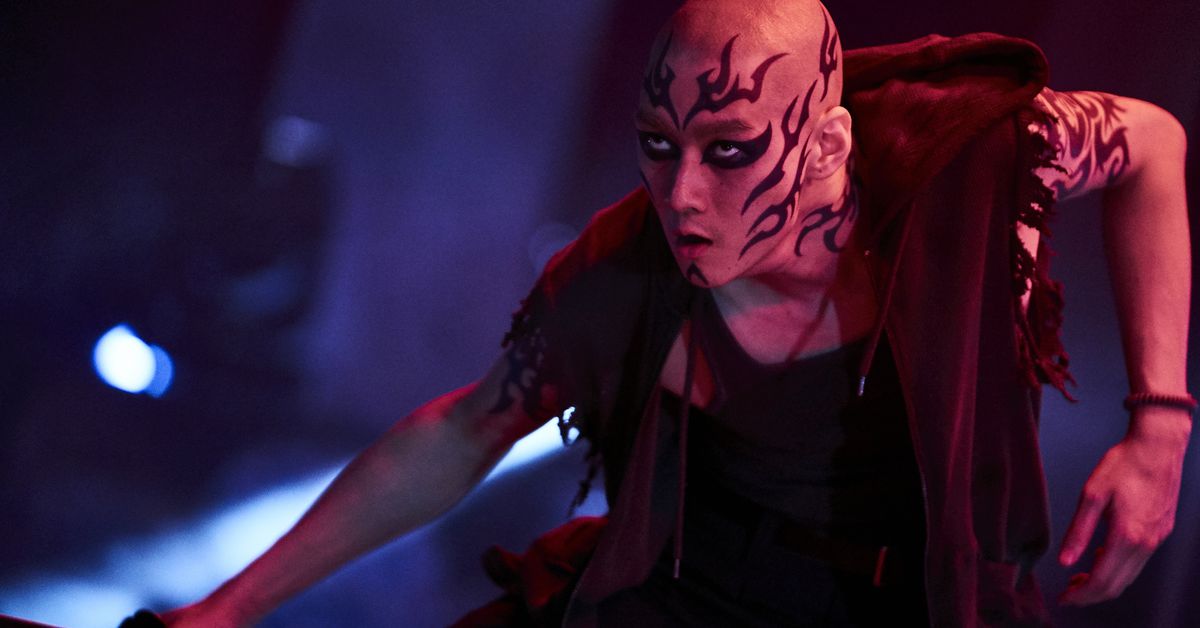 The 10 TV shows and movies to watch after Squid Game


Squid Game, the Korean survival drama series from writer-director Hwang Dong-hyuk, has dominated the Netflix top 10 for weeks. But with only nine episodes in its first season, there’s a newfound demand for shows and movies similar to Squid Game, to help fill the void. Don’t sweat it — we’ve got you covered.

Squid Game has frequently been compared to such films as 2000’s Battle Royale and Bong Joon-ho’s Oscar-winning 2019 thriller Parasite. But we’ve plumbed the depths of our queues and collections to select the best movies and TV shows that are a bit more off the beaten path. From dystopian dramas to tense sci-fi anime, Korean horror thrillers and supernatural “death game” spectacles, here are 10 of the best movies and TV shows to watch while you wait for the next season of Squid Game.

The premise of this Brazilian dystopian thriller series resembles that of Squid Game, with its focus on a desperate population putting themselves in mortal danger for the chance at a better life. Set in an indeterminate future, the world is divided into two castes: the so-called 3%, who live in utopian comfort and affluence on a secluded island separated from the mainland, and everyone else, who live in squalor and destitution in the cities outlying the shore. Every citizen of the “Inland” is provided one opportunity to become one of the 3% — a rigorous and painstaking selection known as “The Process.” While the trials in 3% are less grisly and terrifying than in Squid Game, these aptitude tests encourage more and more violence, in the latter episodes of the first season, as the candidates attempt to survive. There’s a resistance group known as “The Cause” that’s trying to take the society of the 3% down from the inside through infiltrating the Process, as well as a murder mystery at the heart of the supposed perfect society. Barring these differences, 3% might just be what you’re looking for if you’re aching for a more sci-fi inflected take on Squid Game’s more contemporary depiction of the struggle between the haves and have-nots.

3% is available to stream on Netflix.

Alice in Borderland was one of the first recommendations mentioned by fans of Squid Game, in the wake of the show’s meteoric rise. It’s not surprising, given that they’re both available to stream on Netflix. Released late last year, Alice in Borderland follows the story of Ryōhei Arisu (Kento Yamazaki), a 24-year-old slacker with a knack for video games and puzzles, and his best friends Chōta (Yûki Morinaga) and Daikichi (Keita Machida). The three are mysteriously transported to a seemingly abandoned version of Tokyo, and forced to compete in a deadly series of games in order to survive. If any of the participants attempt to escape the boundaries of the play area while the game is in-progress, they are swiftly executed with a shot through the head by a mysterious laser from the sky. Ryōhei joins forces with Yuzuha (Tao Tsuchiya), a hobbyist mountain climber and survivalist — they brave the trials of this strange world in order to figure out what brought them there, in the hopes of returning home alive. The show has a very similar bent to Squid Game with its emphasis on surreal challenges, violent consequences, and heartbreaking performances.

Alice in Borderland is available to stream on Netflix.

As The Gods Will

If you’re looking for a wild survival thriller to match the eeriness of Squid Game’s pastel-colored death games, 2014’s As The Gods Will is a choice recommendation. Based on the first arc of the manga series (written by Muneyuki Kaneshiro and illustrated by Akeji Fujimura), Takashi Miike’s As The Gods Will follows the story of high schooler Shun Takahata, an underachieving student who expresses boredom with the tedium of his everyday life. He wishes for something interesting to happen to him — shortly after, he and his classmates are held hostage by a sentient Daruma doll and forced to play Daruma-san ga Koronda, also known as Red Light, Green Light. If any of the students fails the game, their heads will explode in a shower of bloodied orbs. As The Gods Will is more explicitly supernatural than Squid Game. Shun and his classmates are pitted against each other in a series of increasingly bizarre scenarios, such as trying to throw a bell into a hoop attached to the collar of a giant cat trying to devour them, or being killed by lasers shot by floating wooden dolls. It’s a gory, bizarre, and thoroughly entertaining “death game” drama that jumps from one grisly and inexplicable scenario to the next.

As The Gods Will is available to rent on Vudu.

At first glance, Darwin’s Game appears very similar to Alice in Borderland, albeit with a few crucial exceptions. Based on the manga series of the same name, the anime centers on Kaname Sudou, a 17-year-old high schooler who accepts an invitation from a friend to play a mysterious mobile game called Darwin’s Game. He soon finds himself embroiled in a brutal life-or-death battle with a homicidal “player” in a panda suit, one who possesses their own unique supernatural ability known as a “Sigil.” When one of his friends, a fellow player, is killed while defending him from his attacker, Kaname swears to find the creators of Darwin’s Game and take his revenge on them. Most of the “games” in Darwin’s Game take the form of super-powered anime battles between both individuals and groups of players, with no external challenges resembling those in Squid Game. It’s a decent watch if you’re itching for some more action in the vein of Squid Game, though with far less emphasis on strategy, skill, or any critique of the perniciously predatory nature of capitalism.

Darwin’s Game is available to stream on Netflix, Crunchyroll, Hulu, and Funimation.

While the majority of the films, TV shows, and anime featured on this list, so far, have centered around games of life-or-death and fortune, Death Parade is an anime centered on a group of characters fighting for the fate of their very souls. The series follows Decim, a mysterious bartender on the fifteenth floor of an impossibly large tower, who oversees the “Death Games.” This contest of randomly selected games, like darts or pool, is played from the afterlife: Recently deceased souls compete for the chance to either be reincarnated on Earth or banished to a void of non-existence. The animation is stellar, with an eccentric cast of immortal characters, each with their own approach to arbitrating the Death Games. If you’re looking for a heady, philosophical, and thoroughly entertaining survival drama that plays out like a mix between Saw and The Seventh Seal, Death Parade is an absolute must-watch.

Death Parade is available to stream on Hulu.

Adam Robitel’s 2019 psychological horror film Escape Room is the perfect recommendation for audiences enthralled by the trial-by-fire decision making and life-threatening stakes of the games featured in Squid Game. The film centers on a group of six strangers — a college student, a grocery store worker, a stock trader, an Iraq War veteran, and an escape room enthusiast — who each received a puzzle box containing an invitation to a brand-new immersive escape room experience. It’s only after they arrive that the group realizes the escape room is deadly — and that each of them share something terrible in common. Escape Room is Saw by way of Vincenzo Natali’s Cube, a thrilling horror experience and narrative puzzle-box of intrigue and suspense.

Escape Room is available to rent on Amazon, Apple, and Vudu.

I Saw The Devil

The revelation at the end of the 8th episode of Squid Game — the mysterious “Front Man” behind the twisted competition was none other than Detective Hwang Jun-ho’s long lost brother In-ho, played by Lee Byung-hun — was a terrific surprise for fans of Korean cinema and television. The actor and singer is perhaps best know in the West for his roles in movies such as G.I. Joe: The Rise of Cobra, Red 2, and 2016’s The Magnificent Seven. He’s also famous for his work in Korean films like Park Chan-wook’s Joint Security Area and Kim Jee-woon’s The Good, the Bad, the Weird. The 2010 revenge horror-thriller, I Saw The Devil, is probably the closest of Lee’s past performances to that of his role in Squid Game. In the film, Lee stars as a secret agent who embarks on an unrelenting manhunt to find, torture, and murder the serial killer responsible for the death of his fianceé. The excellent film thoughtfully asks how much one is willing to become a monster in order to bring another monster to justice. A brutal cat-and-mouse game with bracing gore and violence, I Saw The Devil is a perfect recommendation for fans of Squid Game.

I Saw The Devil is available to rent on Amazon, Apple, and Vudu.

Based on Nobuyuki Fukumoto’s manga series of the same name, both Kaiji: Ultimate Survivor and Kaiji: Against All Rules tell the story of Kaiji Itou, a jobless loiterer who becomes responsible for a 3 million yen loan left to him by a former friend who mysteriously disappeared. Without any means to repay the debt, Kaiji is offered a shady deal to participate in an illegal gambling tournament aboard a luxury cruise ship to win back the money. It’s only after Kaiji agrees to play and boards the ship that he realizes the dire mortal circumstances he’s inadvertently gotten into. Kaiji might be the closest show on this list to Squid Game in terms of their respective premises, with a group of down-and-out debtors being forced to stake their very lives in contests of chance, cheating, and psychological manipulation in order to pay back their debts.

Kaiji is available to stream on Crunchyroll.

The 2016 techno-thriller Nerve has only one “game” in play: an online mediated series of “Truth-or-Dare” challenges that grow exceedingly more dangerous as players progress. The film follows Venus “Vee” Delmonico (Emma Roberts), a timid high school senior who downloads the online reality game “Nerve” at the insistence of her friends. Taking on numerous dares around the city, Vee meets Ian (Dave Franco), a fellow player who acts as her partner throughout several rounds of the game. As the night progresses, the tasks that Nerve asks of Vee and Ian become increasingly violent and questionable as the pair attempt to escape the game and free the rest of the players. In truth, Nerve feels more like a neon-saturated take on David Fincher’s The Game than a close parallel to Squid Game, but even with that said, it’s still a fun and thrilling watch.

Nerve is available to rent on Amazon and Apple.

If there’s one brutal takeaway from watching Squid Game, it’s that exorbitant wealth — or the promise of gaining exorbitant wealth — can have a particularly horrifying effect on a person’s moral compass. Also, rich people suck. David Guy Levy’s 2012 horror thriller Would You Rather centers on the machinations of Shepard Lambrick (Jeffrey Combs), a particularly cutthroat “philanthropist” who invites seven strangers to a dinner held at his manor to compete in game of “Would You Rather,” with a promise to provide the winner with whatever they desire. The challenges range from purely cruel, such as offering a recovering alcoholic $10,000 to drink a glass of wine, to homicidal, such daring one of the players to slit their eye open Un Chien Andalou-style in order to advance. It’s terrifying, not only watching Lambrick relish in his “entertainment,” but also seeing what the players are willing to do to themselves and each other in order to win a chance at a better life.

Would You Rather is available to rent on Amazon and Apple.