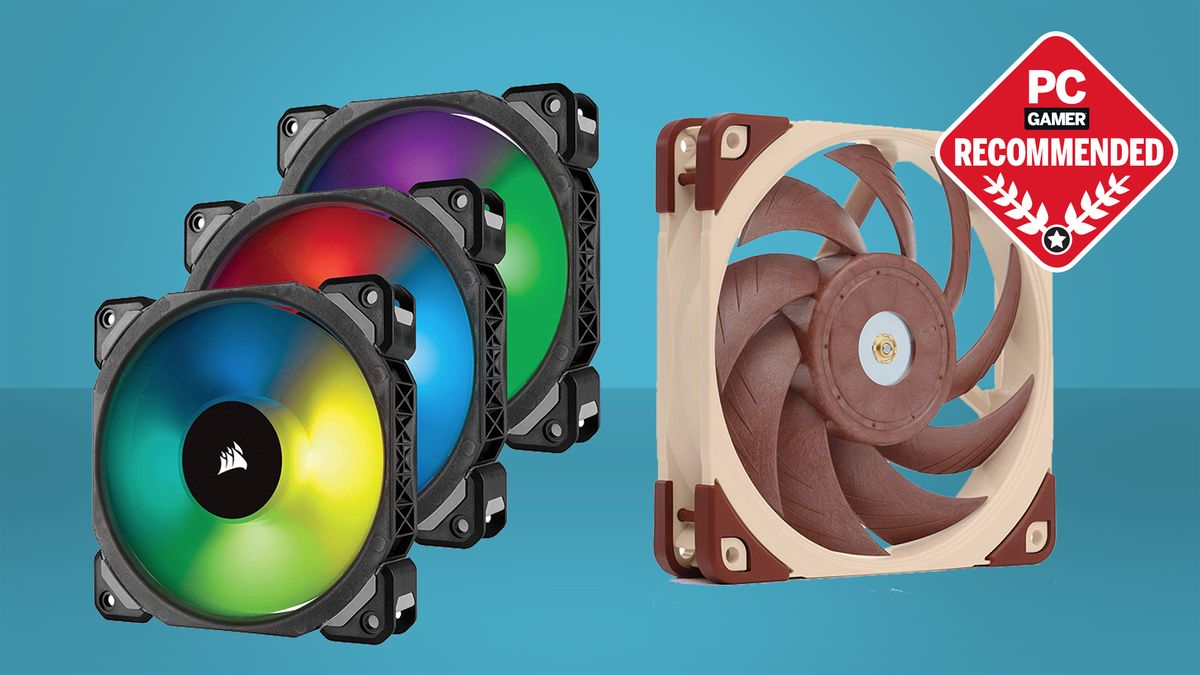 
The best PC fans do not only make for a cool and comfortable PC temperature, they often also keep noise to a minimum. If that’s not enough, with a helping hand from clever clock speed management in today’s top silicon, the best PC cooling fans will help your PC run faster.

If you’re staring down one of the best PC cases, looking to fill it with the latest high-end components, sufficient airflow through your entire case is obligatory—especially if you plan on overclocking your system. Ideally, your PC fan wont add to the noise your machine produces either. That’s often easier said than done, but if sound is a top priority, the Noctua NF-A12x25 PWM is your best bet.

We’ve picked out some of the best pc fans we’ve tested, and listed them below, along with some of the key points that we think make them stand out. Alternatively, if you’re looking for some of the best CPU coolers, we’ve got you covered there too.

+Inexpensive but performs great+Less ugly than the old Noctua models

–No RGB–Not the quietest Noctua fan

If you care at all about case fans, chances are Noctua is a name you already know. It’s a trusted favorite among many DIY builders, and for a good reason. Noctua builds fans that last a long time, move a lot of air, and do it quietly. The problem: until recently, buying Noctua fans meant committing yourself to an ugly (ed’s note: beautiful) khaki-and-mud color scheme straight out of the ’70s. Noctua was the definition of function-over-form, an engineering wonder that would impress any enthusiast who looked at your PC but disgust everyone else.

Noctua’s Redux line rectified this issue, though, recasting time-tested designs in a modern gray-and-black look that won’t detract from the rest of your PC build. And of the two Redux models Noctua sent over, the NF-S12B became a quick favorite. It’s not as quiet nor as efficient as another blacked-out Noctua model, the NF-S12A, but it is cheap. Time was, Noctua fans meant shelling out a lot of money on your build, but the NF-S12B redux balances great performance with a budget-friendly price tag and looks great in the process.

You’ll find no RGB lighting here—no frills of any kind, really. But the NF-S12B’s Self-Stabilising Oil Pressure Bearings will last for years while moving more air at mid-range speeds than any non-Noctua fan we tested and somehow keeping quieter than the competition as well. It’s a clear winner.

The top fan for RGB builds

–Slightly louder at mid-range speeds–Really not for budget builds

Do you need RGB fans? No. Do you want RGB fans? Of course. They can look great in an all-glass case or even through a traditional side window, and if you’re chasing that full-cyberpunk aesthetic, then Corsair’s LL120 Pro RGB fans are the best you can buy.

The LL120s are packed full of RGB LEDs. Each has a complement of LEDs shining out from the rotor, diffusing light down the blades’ length as they spin. Then there’s a separate ring of light embedded around the housing’s outer edge. As a result, the LL120s are the brightest and showiest fans we tested and a perfect fit for any RGB addict.

They’re not just for show, though. The LL120s are also solid fans, lighting or no. At mid-range speeds, they tend to be slightly louder than the competition, but at load, they’re quieter than just about any non-Noctua fan we tested—and that’s only because most of the Noctua fans top out at 1200 RPM, versus 1500 RPM for the LL120.

The biggest problem? They’re expensive. Like, incredibly expensive. To use LL120s, you need to commit to purchasing a three-pack of fans with an included Corsair Lighting Node Pro, a package that lists for $120. Additional fans will run you $35 each. That’s a whole lot of money, even if the results are stellar.

RGB fans on a budget

RGB: Yes, either through motherboard or Cooler Master’s controller

–Really, really loud at top speed–Not exactly quiet below that either

Cooler Master’s RGB design is a bit less high-tech than the Corsair LL120s, featuring only fan-blade lighting instead of the second ring around the outside. It’s still an attractive fan, though, bright and with smooth transitions. And while the package lists for $99, you can usually find it on sale much cheaper. Add in the fact that additional fans only cost $20 each, and you’re set to save a whole lot of money on your cooling setup.

So what’s the catch? They’re loud. Like, really loud. Even Cooler Master admits it, listing the MF120R at 31 dBA. In our own tests, the MF120R kit was reasonably quiet at 1200 RPM but completely unusable at its maximum 2000 RPM speed, posting the loudest measurements of any fan we tested—louder than the other 2000 RPM fans we tested, the NZXT Aer RGB 2 and the Noctua NF-A12x25.

Granted, the MF120Rs move a lot of air at top speed, tying the Noctua NF-A12x25 for the highest airflow. There’s no way you’d want to run them at that speed, though, at least not for typical gaming use. Still, you get a full RGB lighting setup and some pretty strong fans for a fraction of the cost of Corsair’s kit. As long as you limit the MF120Rs to running at 1200 or 1500 RPM max, they might be a good alternative.

Best for moving a lot of air

+Highest airflow of any fan we tested+Lots of accessories included

Here’s some good ol’ Noctua khaki-and-mud for the diehards. The Noctua SF-12B above is a fantastic fan, and rightly our overall pick, but if you’re looking for a top-tier 120mm model that can move a lot of air, the awkwardly named NF-A12x25 blows away the competition. Of all the fans we tested, this is the model that pumped the most air through our test rig.

But—and this is important—the NF-A12x25 was also the quietest fan we tested when running at lower RPM. Our numbers have it putting out less noise at 1200 RPM than some fans running 300 RPM slower. Since those mid-range speeds are generally more likely to come up in day-to-day use, that makes the NF-A12x25 an excellent choice for your average gaming PC while still giving it the headroom to spin up to 2000 RPM in the middle of a heatwave.

Sure, Noctua’s trademark brown fans will stick out like a sore thumb in whatever PC you build, but they’re also a sign of quality, and the NF-A12x25 lives up to the legacy. It’s also a nice touch how many accessories come with the NF-A12x25, from a 12-inch extension cable and a Y-splitter to a bunch of rubber vibration dampers. The price is high, but it’s hard to argue the value.

RGB with a subtler effect

–Louder than most–Bundle pricing is confusing

NZXT makes gorgeous hardware. It’s not always the most cost-effective, nor the most efficient, and indeed the NZXT Aer RGB 2 won’t win any prizes for its performance in our tests. At its top speed of 1500 RPM, the Aer RGB 2 moves a surprising amount of air, but it’s also louder than nearly every other fan we tested. And even in our low-speed tests, the Aer RGB 2 proved a hair noisier than the rest of the competition.

Look at it, though. It’s really a sight to behold. Unlike Corsair, NZXT limits the Aer RGB 2’s LEDs to the outer ring, casting a slight glow on the spinning fan blades without directly illuminating them—and shining a lot of light outwards into the case. It’s an immaculate look, objectively as gaudy as any other RGB setup but seeming a bit sleeker and refined somehow. The Hue 2 controller is also more attractive than any of the other boxes we looked at, meaning you won’t mind having to include it alongside the fans in your all-glass case.

Like Corsair, NZXT struggles with the price, though. A three-pack of 120mm fans plus controller lists for $130, even more than Corsair’s LL120 starter kit, though additional fans somehow list for $30—$5 less than Corsair’s add-ons. Weird.

–Feels cheaper than the rest–Relatively loud at any speed

Our guide to the perfect gaming PC build. Everything you need to know to create gaming perfection.

Scythe doesn’t make a great first impression, granted. The Kaze Flex 120 PWM arrives in a cheap plastic package, looking more like it came from an auto shop than a modern PC retailer. Side-by-side with Noctua’s Redux packaging, or Corsair’s weighty boxes, Scythe feels every part of the budget fan solution.

The Kaze Flex 120 PWM we tested is one of the company’s better models, though. At 1200 RPM, the Kaze Flex 120 moved more air in our test rig than some of the competition (Corsair, for instance) did at 1400 or even 1600 RPM, presumably a result of having eleven blades where most fans have only nine. Lots of air goes hand-in-hand with noise, though, and indeed the Kaze Flex 120 PWM is also noisier than the competition at any given speed setting—though since it tops out at 1200 RPM, the noise is never as bad as models that spin up to higher speeds.

If you want a decent budget-friendly fan and the SF-12B isn’t doing it for you? Scythe’s blade-heavy blower might be the right choice. And hey, it’s one more company that hasn’t dipped into the RGB LED well yet. That’s worth something.

How do I improve my PC’s airflow?

Poor airflow will have a major impact on your PC’s performance. There are varying opinions on fan placement and which provides the best airflow. A good place to start is to avoid a neutral pressure environment as stagnant, hot air collecting around your components won’t help any PC.

Essentially, you’ll want to make sure that you have fans for intake and exhaust so that the air is moving inside your PC case. Both positive and negative air pressure setups will do the job well and ensure that cool air is being pulled into your case while hot air is expelled.

How are PC fans tested?

There are a lot of case fans out there, so we had to set a few guidelines. First, we limited our tests to 120mm fans. It’s not because we hate 140mm. On the contrary! 140mm fans are generally quieter and move more air, making them a great choice for any case that can handle the larger size. But 120mm is still the “default” case fan, and it’s hard to compare different fan lines when you’re also comparing different sizes, so we stuck to 120mm versions as a control. (We’ve tried to provide the model number for the 140mm version where possible.)

With that in mind, we contacted a number of the most popular case fan manufacturers and had them send over both their best-selling and their personal favorite 120mm models. Then we hacked together a miniature wind tunnel with an anemometer inside, a device that measures airflow. This helped us match airflow between different fans at different RPM and then use a decibel meter to measure relative loudness. As we said up top: You want a balance between airflow and noise. We took our decibel readings from five inches, which is closer to these fans than you’d ever be, but helped clarify what otherwise minute differences in noise level are.

We then maxed out the RPM on each fan to test a theoretical airflow limit and the accompanying noise. Chances are you’d never run most of these fans at 100 percent—that’s why they’re PWM fans! But if you have an older motherboard without PWM (or have a system that runs hot), you might hit this limit, and it’s good to know how loud your PC could potentially get and how much air these fans hypothetically move. As for RGB lighting? Well, we have eyes for those tests.

Round up of today’s best deals