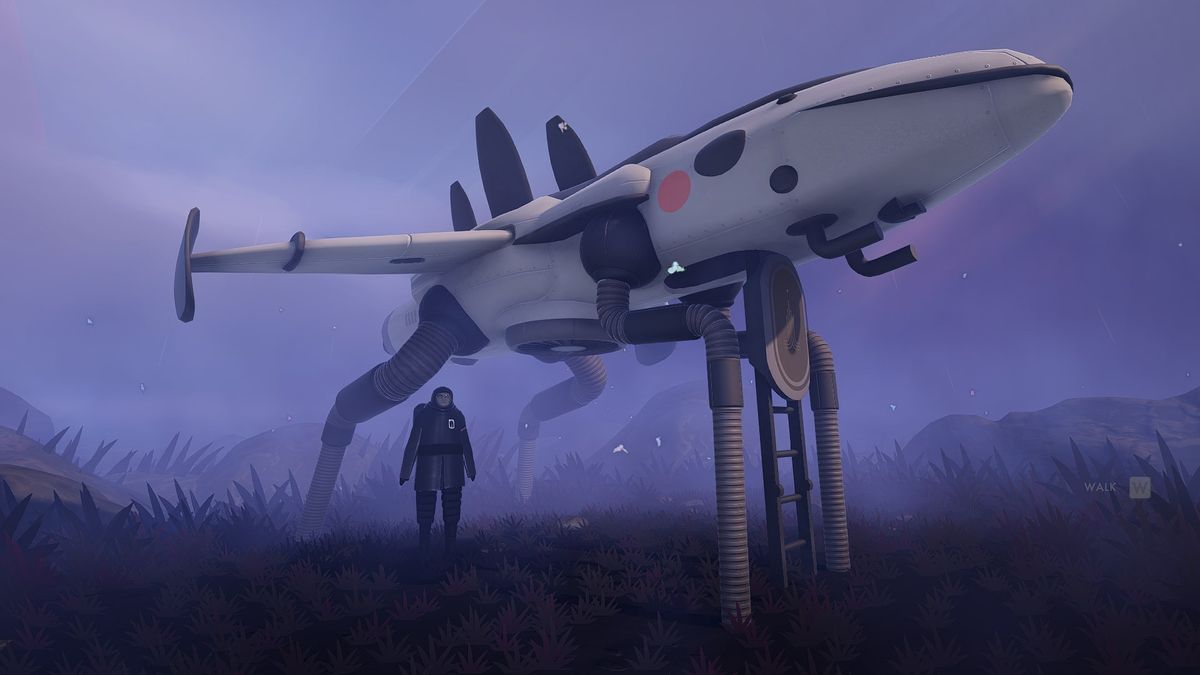 It’s a sci-fi story we’ve all heard before. Humans have yet again messed up the planet and in desperation to save civilization must now look for a new home amongst the stars. The trope has been done to death, but when indie studio Superbrothers announced that Jett: The Far Shore was going to be their own take on the trope, I couldn’t have been more thrilled. It’s been almost ten years since the studio released Sword and Sworcery—the quietly contemplative adventure about a warrior exploring a strange, mystical realm—and to see the team, together with Pine Scented, take on a grand sci-fi adventure where science meets spirituality is something to get excited about.

For the most part, Jett: Far From Shore is successful in doing exactly that, its lofty, sweeping story of humans and faith pulling you into its strange world. The humans in Jett are not only looking for a new home but have been contacted by ‘the hymnwave’, a divine invitation from a being situated on an alien planet in outer space. Desperate to escape their dying planet that’s choking from the black plumes of industrialization a group of space scouts is formed to inspect the planet and see whether this strange world—”the far shore”—could become a new home for their people.

As the team boards the spaceship ready to take off in the opening scene, the entire population has gathered to say goodbye. It’s a sea of hundreds of people and they’re all singing the same mournful song as a farewell. It’s a somber, powerful start to the game that sets the stakes high for the mission before you.

In Jett you play as Mei, a scout pilot and mystic who has been chosen to accompany the team on their pursuit. After arriving on the planet, early game tasks are all about exploration. Driving a little, nippy ship called a ‘jett’, you need to observe the planet’s ecosystem and gather data. Your jett is equipped with tools to help you research including a scanner, flashlight, and grappling hook, and as you cruise through the landscape you can scan different vegetation and animals to see how they behave and fit into the wider ecosystem.

Jett’s alien landscape inspires this research. This mysterious planet is home to huge lakes, vast pink meadows, and giant purple planes—you won’t find any browns or greys in this world. There are plenty of weird discoveries to be made, like hovering your jett over various plants and using your boosters to ‘pop’ them, unleashing waves of colourful spores. There are shrubs that ooze yellow gunk and if you pick some of the goo up with your grappling hook it will attract various alien creatures. These insights aren’t big enough that they affect the story but instead offers neat insights into how this strange planet works. It’s fun to discover these little surprises but, unfortunately, it’s made less appealing due to the flying, which can be fiddly at best, frustrating at worst.

The ship’s controls are, in short, a little awkward. It’s not all bad though: on the water your speedy jett works like a dream. Using your boosters without overheating them and whipping your ship around for quick turns when you have plenty of open space is easy enough, and those moments where you’re speeding across exposed waters, pedal to the metal, feel amazing. But, it’s obvious that the jetts are ships built for speed, not precision.

On land, it’s an entirely different story. Thank Christ my co-pilot, Isao, is a chill dude because I’m crashing into cliffs, getting snagged on rocks, and caught in various vegetation. The world around you inspires all kinds of tricks, like ghokebloom plants that lift you into the air, the little sparkles of light that’ll boost your momentum, and obvious launching points built naturally into the landscape. But I never got to play out any of the environment’s cool moves. As you continue exploring the planet, there are beautiful craggy landscapes and rugged mountains—none of which I could fully traverse due to the lack of precision. Having to pay attention to the dialogue, keep an eye on your booster gauge, navigate the landscape, and avoid enemy attacks all while trying to pilot a finicky high-speed jet is a lot to ask.

This frustration seeps into other parts of the game. There are plenty of dramatic encounters where you have to zip away from flying perils, but often they lose excitement because of the controls. However, when these events happen in open waters or in expanse plains, they’re nothing short of thrilling. One of the planet’s most dangerous threats is the Gloaming, a red haze that’s cast down from a blood moon at night. It’s an eerie red glow that directly damages your jett and the only thing you can do is try and find shade until morning. Darting across the sea trying to outpace the moon’s light was one of the game’s many hair-raising highlights.

The Gloaming is just one of many spectacular sights found on this new world, and the best parts of Jett are the moments where you get to experience them outside of your ship, hopping out of your cruiser and walking around. Usually, it’s only a small area, but nevertheless, they are spectacular sights. In one section you’re asked to blow up the entrance to a mountain cavern, which from the cockpit of your jett looks inconspicuous. But as you step outside and walk deeper into the cavern, you realise it’s huge. Everything comes into perspective and you understand just how small you are on this incredibly strange planet.

When not gawping at the planet’s spectacular sights, there are sections where you’re back at home base in-between outings, chatting with your team and getting mission updates. There’s not much to learn about your fellow scout members personality-wise, and cutscenes can be a little stagnant. This isn’t helped by the pacing, which feels slow but purposeful—something, surprisingly, that I appreciated. The game has its own language every character uses and together with how softly they speak, it all adds to Jett’s poetic mysticism.

The main hook for Jett’s story is its cryptic spirituality. Without giving too much away, there are talks of visions, legends, promises, and scripture—everything you need to weave together a foundation for a grand narrative. The scenery matches this sentiment, there are hundreds of mysterious black pyramids jutting out of the sea, towering eerie mountains masked in fog, and weird creatures that are hostile toward intruders. It’s a spellbinding world and one that is in direct opposition with itself. Why did the ominous hymnwave invite humans to a planet whose ecosystem is actively hostile to intruders?

It’s a brilliant hook, and a question that follows you from the moment you step foot on the planet, but it’s one of many that fall to the wayside. Mei being a mystic and acolyte of God is made out to be a big deal, but it’s never really addressed why, and her mystic duties feel like nothing more than being a good luck charm. Many of the missions, with a few exceptions, are simply busywork—collecting resources, finding lost parts, running away from enemies—and not about uncovering the mysteries of the planet. Games that are more poetic in nature are under no obligation to address or explain their stories—but with such brilliant opening chapters, rich with lore and curiosity, I didn’t get all the answers I’d hoped for when I finished the game.

Jett: The Far Shore has an epic hook: A civilisation trying to outpace oblivion, so desperate to escape extinction that they’ll follow the lull of an ominous intergalactic force at the promise of sanctuary. The finicky controls leave something to be desired, but overall Jett: The Far Shore is a spellbinding adventure.